A Room for a Writer

We started by carving from a small clay block. The intention was to create an interior space while keeping the exterior perimeter mostly intact. This method emphasized the subtractive process of carving. I would have made something much different if I was building up. I used a spoon to carve, and a straight metal rod to poke the holes, which let the light stream in.

Next, we were given our building program, a Room for a Writer. The role and action of the writer could be something very specific or ambiguous. The space could be for inspiration, a place to work or live, the intent was up to the designer.

We switched media, from clay to cardboard, but the method remained. It was required to stack the cardboard so that the interior space seemed carved, detracting from a solid block rather than building small boxes to create a larger space.

I chose to design for someone who writes about rock climbing. When climbing a person is hyper aware of the height above and below, the interior space is intended to emphasize that sensation. Upon entering, there is a monolith wall towering behind the writer, looking forward the dweller can walk out to overlook a vast depth or openness, that is visually suspending the block above. This idea remained through each iteration.


Revised model - I changed the orientation of the entrance stair, and added an open space to the elevated block, the writer can climb up to look out. 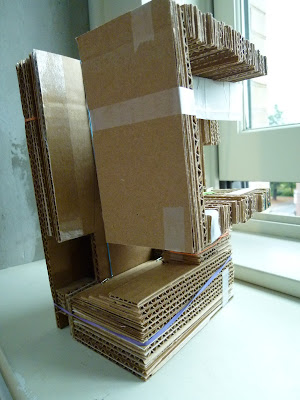 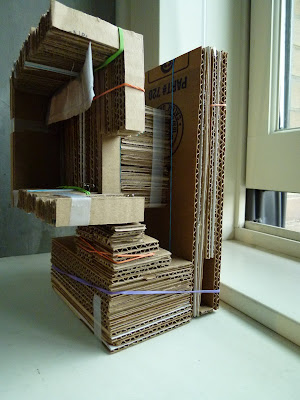 Formwork - The final phase of the project was to cast the model in plaster. To build accurate formwork, the model had to be inverted, the positive space became the negative. The professors limited each student to three parts. 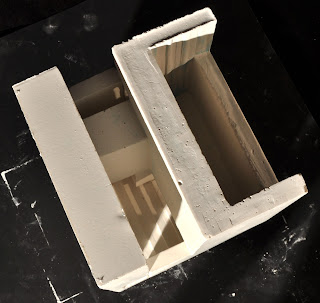